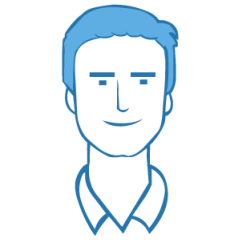 Occasionally, I need to spin up a few local virtual machines on my Windows 10 laptop to test a networking concept. Building a practical multi-machine configuration can be challenging. For me, this typically means:

A simple solution may be to place the guest VMs on the same external network as the VM’s host network and obtain the IP addresses dynamically or to set them statically. Although this satisfies the listed requirements, it also means you don’t you have full control over the network configuration.

A particular issue for me is when I move between home and office networks, the IP ranges differ and require new IP addresses for my VMs. 😢 It also means certain tests, like running a DHCP server, is not a good idea or even possible.

The critical piece in this architecture is the Router with two virtual Network Interface Cards (NICs). It connects the two networks by routing traffic between them. Although connected, the virtual and physical network are still isolated from each other and won’t allow network traffic such as DHCP broadcasts.

A successful setup should allow for communication between the following nodes on the network:

What you will need

The table below list the components necessary to build the Solution Design; the network address ranges are configurable for your specific needs.

As evident from several guides on the Internet, there are many alternative techniques to build this virtualised network. I selected a configuration that suits my needs, which meant something that plays well with Windows 10, Windows Sandbox, WSL2 and Docker without having to buy or download additional software.

Enable the Hyper-V role on your Windows 10 machine that will serve as the VM host. 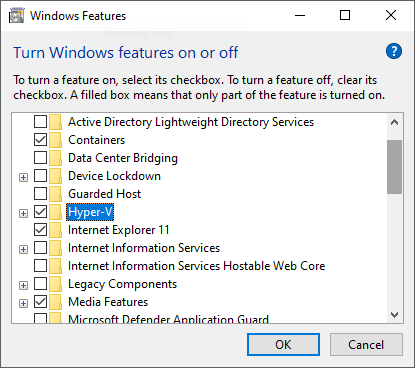 Press the Create Virtual Switch button and create a switch named External (LAN) and continue to configure the switch as per the rest of the settings below: 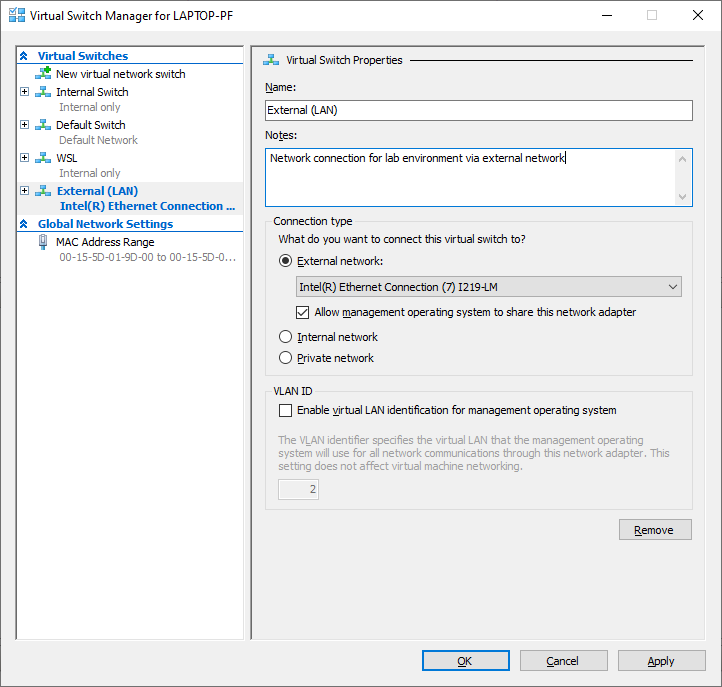 At this point, the newly created Virtual Switch is configured but not yet in use as it is not assigned to any VMs yet.

The router is a virtual appliance with two virtual NICs that connects the two networks. I selected Linux as the operating system for this task as it is free, simple to configure and only requires a small amount of system resources.

I tested with Ubuntu 20.04 and it also works. Still, I wanted to reduce the resource footprint a bit and decided to use Debian 10.5 instead. I am sure this can still be further optimised, but 1GB of hard disk space and 256MB of memory was good enough for me.

To create the VM run the Powershell commands below with Admin privileges.

After running create-router.ps1 the Router VM should be running and prompting you to start the Debian installation process. The installation is relatively straightforward, except for defining the partition table for a 1GB drive. Unfortunately, the Guided partitioning process fails because of the small 1GB drive. It requires the additional step of manually creating the partition table.

The primary settings during the OS installation process are:

When the installation is done, update the current allocated memory by reducing it to 384MB.

Next, connect to the newly created Linux VM to set its network settings. I suggest using Hyper-V to connect to the VM and obtain its current IP address after that connect to it with a more convenient terminal.

To obtain the IP address for eth0, run:

Update the Debian networking settings by updating the /etc/network/interfaces file.

Update the contents of the file according to your network settings:

To route packets between the two networks, IP forwarding has to been enabled on the Linux Router. While connected to the Linux Router 192.168.1.10 perform the following steps.

Update /etc/sysctl.conf with the setting below to enable forwarding and also to persist the setting when the VM restarts.

Apply the change by running:

At this point, it should be possible to run the following commands from the Linux Router successfully:

The hard work has been done, and we are only left with a few small steps on the other network nodes. 😅

A quick note about Network Gateways

To route traffic between different networks, the help of network gateways is needed. Routing tables on each client contains rules that indicates which gateway to use for a given destination.

A slightly more involved scenario is when Carol wants to access the Internet, it requires an additional gateway hop.

To add a routing rule on Alice and Bob run the following Powershell commands as Admin:

To confirm the entry has been added to the local routing table run:

When your testing is complete and want to remove the routing rules, run one of the following commands:

This step is optional.

Typically, these VMs runs useful workloads for development or testing purposes, and it is up to you what you install on them. For these machines to access the Internet and the 192.168.1.0/24 network, make sure these machines have a default gateway of 192.168.2.10.

At this point, you should be able to communicate between all nodes on either of the networks.

The following tests should all work:

We are done, and you should have an isolated network environment for your test lab. 👊

It might be useful to automate the process of switching between networks if you move between home and office networks often. This can be accomplished by scripting the required changes on the Linux router and your machine.